The Evolution of the Nydus Image Acceleration​

Optimized container images together with technologies such as P2P networks can effectively speed up the process of container deployment and startup. In order to achieve this, we developed the Nydus image acceleration service (also a sub-project of CNCF Dragonfly).

In addition to startup speed, core features such as image layering, lazy pulling etc. are also particularly important in the field of container images. But since there is no native filesystem supporting that, most opt for the userspace solution, and Nydus initially did the same. However user-mode solutions are encountering more and more challenges nowadays, such as a huge gap in performance compared with native filesystems, and noticable resource overhead in high-density employed scenarios.

Please refer to Nydus for more details of this project. Now you can experience all these new features with this user guide.

The fundamental idea of the container image is to provide the root directory (rootfs) of the container, which can be carried by the filesystem or the archive format. Besides, it can also be implemented together with a custom block format, but anyway it needs to present as a directory tree, providing the file interface to containers.

Let's take a look at the OCIv1 standard image format first. The OCIv1 format is an image format specification based on the Docker Image Manifest Version 2 Schema 2. It consists of a manifest, an image index (optional), a series of container image layers and configuration files. Essentially, OCIv1 is a layer-based image format, with each layer storing file-level diff data in tgz archive format. 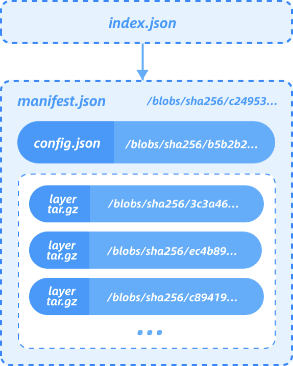 Due to the limitation of tgz, OCIv1 has some inherent issues, such as inability to load on demand, coarser level deduplication granularity, unstable hash digest for each layer, etc.

As for the custom block format, it also has some flaws by design.

Therefore, Nydus is a filesystem-based container image acceleration solution. It introduces a RAFS image format, in which data (blobs) and metadata (bootstrap) of the image are separated, whilst the image layer only stores the data part. Files within the image are divided into chunks for deduplication, with each image layer storing the corresponding chunk data. Since then, the chunk-level deduplication is allowed between layers and images. Besides it also helps implement on-demand loading. Since the metadata is separated from data and then combined into one place, the access to the metadata does not need to pull the corresponding data, which speeds up the file access quite a lot.

The Nydus RAFS image format is shown below: 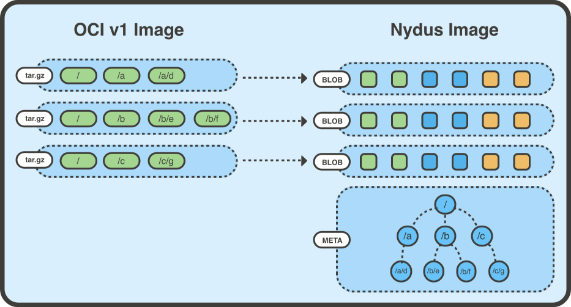 Prior to the introduction of RAFS v6 format, Nydus used to handle a fully userspace implemented image format, working via FUSE or virtiofs. However, the userspace filesystem has the following defects:

Essentially these problems are caused by the natural limitations of the userspace filesystem solution, and if the container filesystem is an in-kernel filesystem, the problems above can be resolved in practice. Therefore, we introduced RAFS v6 image format, a container image format implemented in kernel based on EROFS filesystem.

EROFS filesystem has been in the Linux mainline since the Linux 4.19. In the past, it was mainly used for mobile devices. It exists in the current major distributions (such as Fedora, Ubuntu, Archlinux, Debian, Gentoo, etc.). The userspace tools erofs-utils also already exists in these distributions and the OIN Linux system definition list, and the community is quite active.

EROFS filesystem has the following characteristics:

Over the past year, the Alibaba Cloud kernel team has made several improvements and enhancements to EROFS filesystem, adapting it to the container image storage scenarios, and finally presenting it as a container image format implemented on the kernel side, RAFS v6. In addition, RAFS v6 also carries out a series of optimizations on the image format, such as block alignment, more compact metadata, and more.

The new RAFS v6 image format is as follows:

The improved Nydus image service architecture is illustrated as below, adding support for the (EROFS-based) RAFS v6 image format:

And on LWN.net as a highlighting feature of the 5.19 merge window:

Prior to this, almost all lazy pulling solutions available were in the user mode. The userspace solution involves frequent kernel/user mode context switching and memory copying between kernel/user mode, resulting in performance bottlenecks. This problem is especially prominent when all the container images have been downloaded locally, in which case the file access will still switch to userspace.

In order to avoid the unnecessary overhead, we can decouple the two operations of 1) cache management of image data and 2) fetching data through various sources (such as network) on cache miss. Cache management can be all in the kernel mode, so that it can avoid kernel/user mode context switching when the image is locally ready. This is exactly the main benefit of erofs over fscache technology.

fscache/cachefiles (hereinafter collectively referred to as fscache) is a relatively mature file caching solution in Linux systems, and is widely used in network filesystems (such as NFS, Ceph, etc.). Our attempt is to make it work with the on-demand loading for local filesystems such as EROFS.

In this case, when the container accesses the container image, fscache will check whether the requested data has been cached. On cache hit, the data will be read directly from the cache file. It is processed directly in kernel, and will not switch to userspace.

Otherwise (cache miss), the userspace service Nydusd will be notified to process this request, while the container process will sleep on this then; Nydusd will fetch data from remote, write it to the cache file through fscache, and awake the original asleep process. Once awaken, the process is able to read the data from the cache file.

Advantages of the Solution​

As described above, when the image has been downloaded locally, userspace solutions still need to switch to userspace when accessing, while the memory copying overhead between kernel/user modes is also involved. As for erofs over fscache, it will no longer switch to userspace, so that on-demand loading is truly "on-demand". IOWs, it has native performance and stability when images has been locally ready. In brief, it implements a real one-stop and lossless solution in the following two scenarios of 1) on-demand loading and 2) downloading container images in advance.

Specifically, erofs over fscache has the following advantages over userspace solutions.

After the container is created, Nydusd can start to download images even without the on-demand loading (cache miss) triggered. Nydusd will download data and write it to the cache file. Then when the specific file range is accessed, EROFS will directly read from the cache file, without switching to the userspace, whilst the other userspace solutions have to go the round trip.

When on-demand loading (cache miss) is triggered, Nydusd can download more data at one time than requested. For example, when 4KB I/O is requested, Nydusd can actually download 1MB of data at a time to reduce the network transmission delay per unit file size. Then, when the container accesses the remaining data within this 1MB, it won't switch to userspace anymore. The userspace solutions cannot work like this since it still needs to switch to the userspace on data access within the prefetched range.

When images have been downloaded locally (the impact of on-demand loading is not considered in this case), erofs over fscache performs significantly better than userspace solutions, while achieving similar performance compared to the native filesystem. Here is the performance statistics under several workloads as below[1].

It can be seen that the read/randread performance in fscache mode is basically the same as that in loop mode, and is better than that in fuse mode; however, there is still a certain gap with the performance of the native ext4 file system. We are further analyzing and optimizing it. In theory, it can achieve basically lossless performance with that of native filesystem.

Test the performance of file metadata operations by performing a tar operation [4] on a large number of small files.

It can be seen that the erofs format is even better than that of the native ext4 filesystem, which is caused by the optimized filesystem format of erofs. Since erofs is a read-only filesystem, all its metadata can be closely arranged, while ext4 is a writable filesystem, and its metadata is scattered among multiple BGs (block group) .

Test the performance of linux source code compilation [5] as the typical workload.

It can be seen that fscache mode is basically the same as that of loop mode and native ext4 filesystem, and is better than fuse mode.

Since the erofs over fscache technology is implemented based on files, i.e. each container image is represented as a cache file under fscache, it naturally supports high-density deployment scenarios. For example, a typical node.js container image corresponds to ~20 cache files under this scheme, then in a machine with hundreds of containers deployed, only thousands of cache files need to be maintained.

6. An one-stop solution for container image​

With RAFS v6 image format and erofs over fscache on-demand loading technology, Nydus is suitable for both runc and Kata as a one-stop solution for container image distribution in these two scenarios.

More importantly, erofs over fscache is a truly a one-stop and lossless solution in the following two scenarios of 1) on-demand loading and 2) downloading container images in advance. On the one hand, with the on-demand loading feature implemented, it can significantly speed up the container startup, as it does not need to download the complete container images to the local. On the other hand, it is compatible with the scenario where the container image has been downloaded locally. It will no longer switch to userspace in this case, so as to achieve almost lossless performance and stability with the native filesystem.

After that, we will keep improving the erofs over fscache technology, such as more fine-grained image deduplication among containers, stargz support, FSDAX support, and performance optimization.

Last but not least, I would like to thank all the individuals and teams who have supported and helped us during the development of the project, and specially thanks to ByteDance and Kuaishou folks for their solid support. Let us work together to build a better container image ecosystem :)